Affirm Holdings, Inc’s . (NASDAQ:AFRM) shareholders have had a wild ride since the company held its IPO in January. The stock began trading at $91, and reached $146.90 within a month, before collapsing to below $50 by May. Since then there have been several positive developments which have seen the price back above $100, and once again targeting February’s high.

The major news has been a partnership with Amazon (NASDAQ: AMZN) whereby Affirm will provide finance to Amazon’s customers. This announcement resulted in an immediate 43% jump in the share price.

Earlier this month the company released fourth quarter results, and reported year-on-year revenue growth of 71%. This was substantially higher than the year-on-year growth in the previous two quarters. Profits were lower than expected, but the market chose to focus on the revenue growth.

The ‘buy now, pay later’ credit model has also received a vote of confidence from some major players in the financial industry. In July, Square (NYSE:SQ) entered the BNPL market by acquiring Afterpay for $26 billion. Since then, Mastercard (NYSE: MA) and Visa (NYSE:V) have both launched BNPL products too.

Check out our latest analysis for Affirm Holdings

Affirm Holdings has a diverse group of insiders, including the company’s founders, management team, and early investors. The funds and companies that invested in affirm before its IPO might not be true ‘insiders’, but they will usually be closer to the company than other public market investors. When we include companies and funds that invested while the company was still private, insiders own around 25% of Affirm. 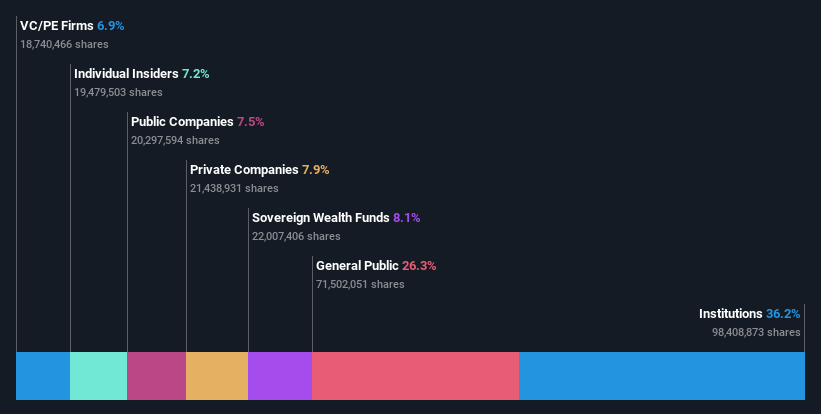 Having a management team with ‘skin in the game’ is always reassuring as it can help to align the interests of shareholders and the leadership team. However, when a company goes public there is always a risk that insiders and early investors will sell shares and depress the stock price. For this reason IPOs usually have a lock-up period to prevent too many shares coming to the market soon after the IPO.

The lock-up period, for Affirm, expired on 12th July. However, in March, a partial release was enacted which allowed certain insiders to sell up to 10% of their holding. This early release made up to 15.6 million shares available for sale.

The good news is that very few of these shares were sold during the early release period, and no shares have been sold since the remainder of the lock-up period expired. It’s particularly notable to see that the VC and private equity firms have held onto their shares. Typically private investors will exit as soon as they believe further upside is limited.

Affirm is still some way from profitability, and valuing such a business is always a bit of a guessing game. But in Affirm’s case, the fact that insiders are holding onto their shares now that the price is well above the IPO level, is encouraging. On the face of it, this suggests they still see potential gains ahead.

Institutional shareholders now own 36% of the company which is also encouraging. Ideally we would like to see this increase more in the future.

We see the fact that insiders are holding onto their shares as a vote of confidence in the share price, which has now risen 137% since the May low. It’s always worth keeping an eye on what insiders are doing -  you can track insider transactions here.

We've also identified 2 warning signs with Affirm Holdings , and understanding them should be part of your investment process.

Valuation is complex, but we're helping make it simple.

Find out whether Affirm Holdings is potentially over or undervalued by checking out our comprehensive analysis, which includes fair value estimates, risks and warnings, dividends, insider transactions and financial health.

Simply Wall St analyst Richard Bowman and Simply Wall St have no position in any of the companies mentioned. This article is general in nature. We provide commentary based on historical data and analyst forecasts only using an unbiased methodology and our articles are not intended to be financial advice. It does not constitute a recommendation to buy or sell any stock and does not take account of your objectives, or your financial situation. We aim to bring you long-term focused analysis driven by fundamental data. Note that our analysis may not factor in the latest price-sensitive company announcements or qualitative material.

Richard is an analyst, writer and investor based in Cape Town, South Africa. He has written for several online investment publications and continues to do so. Richard is fascinated by economics, financial markets and behavioral finance. He is also passionate about tools and content that make investing accessible to everyone.

Affirm Holdings, Inc. operates a platform for digital and mobile-first commerce in the United States, Canada, and internationally.

The Snowflake is a visual investment summary with the score of each axis being calculated by 6 checks in 5 areas.

Read more about these checks in the individual report sections or in our analysis model.

Cyclical Stocks On The Rise And Natural Gas Prices Plunge

Richard Bowman
3 Insights From Q3 Earnings, And What It Means For The Quarter Ahead

Simply Wall St
Are Strong Financial Prospects The Force That Is Driving The Momentum In Abbott Laboratories' NYSE:ABT) Stock?