If you don’t live with children under the age of 16, you’ve probably never heard of Roblox ( NYSE:RBLX ) . While it operates in the gaming industry, it hasn’t made a single game, because it's a platform. Just like Airbnb is a platform for holiday rentals and Etsy is a platform for unique artisan goods, Roblox is a platform for game creation.

The company just went public the other week via a direct listing instead of the traditional IPO route and debuted with an impressive 66% rise on day one. No doubt the narrative of a huge gaming market opportunity and its favorable platform metrics got most investors excited and willing to pay up.

Since there are many examples of similar platform companies that have thrived with this model (i.e. Airbnb and Etsy), Roblox could be a compelling opportunity as well, at the right price. This piece will go into what Roblox is, why it’s unique in the gaming space and what needs to happen to help justify today’s valuation.

As mentioned, Roblox is a gaming platform, not a game studio. It has never created a game. Instead, it functions as an online platform that is made up of 3 elements: Roblox Studio, Roblox Client and Roblox Cloud.

Roblox Studio is the toolset they provide developers to build, publish and operate their 3D experiences (games) and other content that’s accessed by users such as customization options. Roblox Client is the application that allows users to explore the 3D digital worlds created by the developers and Roblox Cloud is the infrastructure and services that powers the platform.

The company operates under a freemium model, whereby users can play any game they like, but they pay to unlock more features and customisation of their characters. These sales of digital items make up virtually all of Roblox’s revenue, while advertising, royalties and licenses make up a minute portion.

The company’s primary expenses are paying developers (35% of revenue), infrastructure, trust and safety (28% of revenue - think data centers and content monitoring personnel), and payment processing fees on their distribution channels, like the App Store and Google Play (25% of revenue). Before panicking at these expenses making up 88% of the company’s revenue, it’s worth noting that a metric called “Bookings” reflects a more accurate indication of the company’s actual sales.

Bookings refers to all the proceeds Roblox receives for the sale of virtual items in the games. These proceeds are recorded as deferred revenue on the balance sheet and are only recognised as revenue over the average lifetime of the paying user (which is typically 23 months), or when the digital items are consumed. It’s an accounting nuance that we also mentioned in our piece on Zynga Inc.

So with that in mind, the company recorded $1.9bn of bookings for 2020 (up from $499m in 2018). That would indicate the above expenses actually represent 17%, 14% and 13% of sales, respectively. This is important to keep in mind when you see that the company is currently loss-making with its current revenue recognition method, that doesn’t account for total bookings.

The platform has 8 million active developers from over 170 countries that have created over 20 million “experiences” (games) for users to play, and even more accessories for them to use and buy. Roblox Studio has opened up the world of game creation to small-scale developers by providing them a full stack offering of tools and services, plus acces to an active and engaged user base of players.

Scott Galloway, Professor of Marketing at NYU Stern School of Business put it incredibly well when he said: “ Money follows attention, and one firm has more of our children’s attention than any firm on earth”.

He was of course referring to Roblox. Since we live in the attention economy, having high engagement and maintaining it is a matter of survival for all entertainment firms. As for the children's attention (which is Roblox’s primary users - 54% are under 13), no firm, even social media firms, has done this better than Roblox (This may be partly because social media giants would struggle to comply with COPPA , but that’s another story). Here are some statistics to emphasize the point.

Over 2020, 30.6 billion hours of engagement was accumulated by the 32.6 million daily active users (DAU’s). That’s the equivalent to 2.6 hours per day, per daily user. This DAU engagement metric is more than children spent on Youtube, Tiktok and Instagram, combined.

That’s because these children are scratching multiple itches at once. The experiences (games) they play take inspiration from gaming, entertainment, social media, and even toys. They explore universes, interact and socialise with friends, watch stories unfold and run around as their own personalized characters. It’s effectively a social network and game for kids, which is a market the other big studios like Electronic Arts Inc ( NASDAQ:EA ) , Activision Blizzard ( NASDAQ:ATVI ) and Facebook ( NASDAQ:FB ) typically haven’t addressed.

And as mentioned, when users are engaged more, they typically spend more. This is a mouthful of a metric, but the Average Bookings Per Daily Active User (ABPDAU) reached $57.77 for 2020, up from $41.53 in 2018. This aligns with the fact that hours engaged per DAU increased from 2.1 hours to 2.6 hours in that timeframe as well. 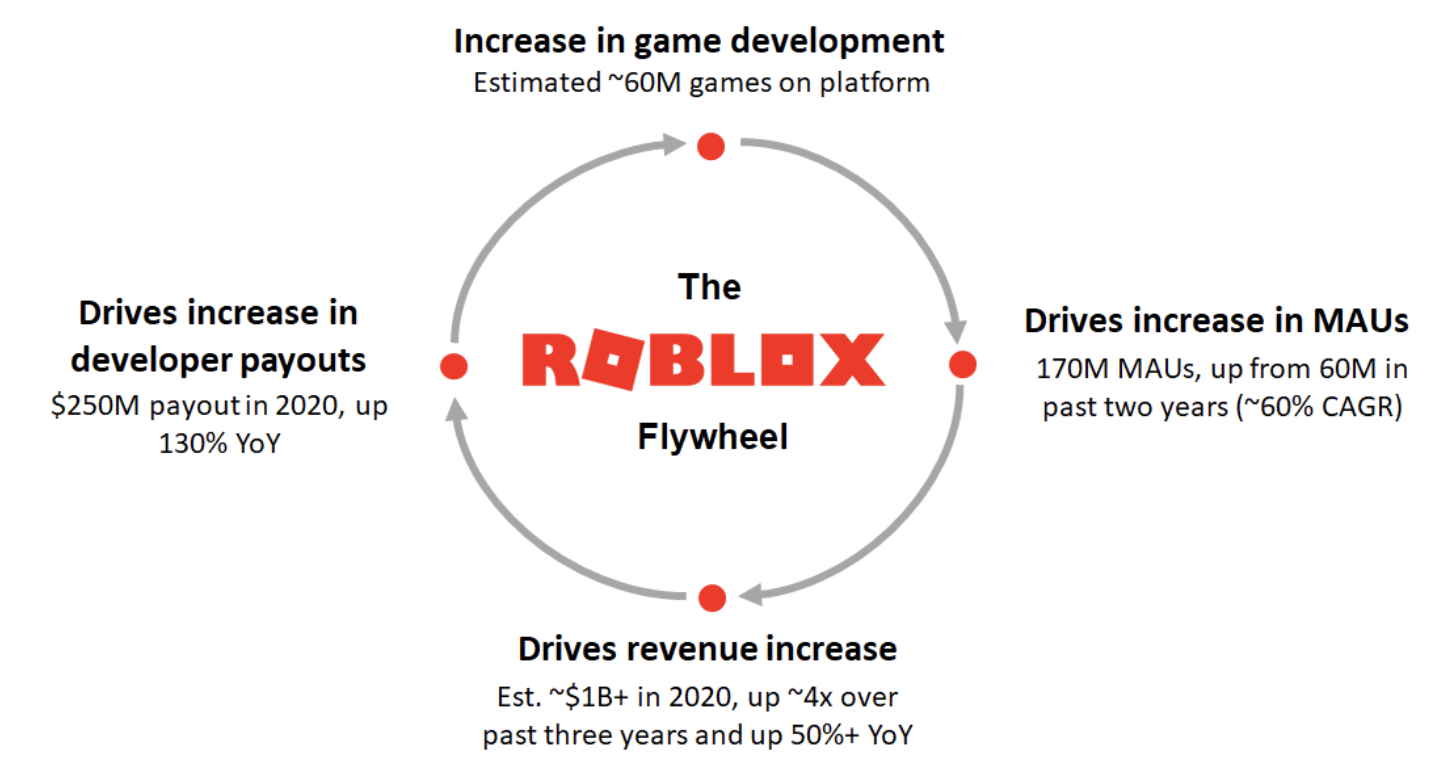 By most measures, Roblox’s valuation appears quite high. Its market cap is sitting around $37bn which means the company is trading at roughly 40x 2020 revenue, 86x Free Cash Flow (FCF) and is currently unprofitable ($253m loss over 2020). If we use bookings instead of revenue, it’s trading at 20x bookings, but that’s a non-GAAP measure.

One year earlier, this valuation was quite different. In February of 2020, the company was valued at $4bn after raising $150m in its Series G funding round, and then $29.5bn in its Series H funding round in January 2021, when it raised a further $520m.

It appears future expectations are outpacing the underlying business developments, which is not uncommon amongst high growth stocks. The company’s valuation has risen almost 10-fold in less than a year while the underlying business saw 86% revenue growth, 273% bookings growth and huge 2900% FCF growth. Expectations from analysts over 2021 are for 112% revenue growth and a slight 7% decline in FCF as the company continues to re-investment heavily. 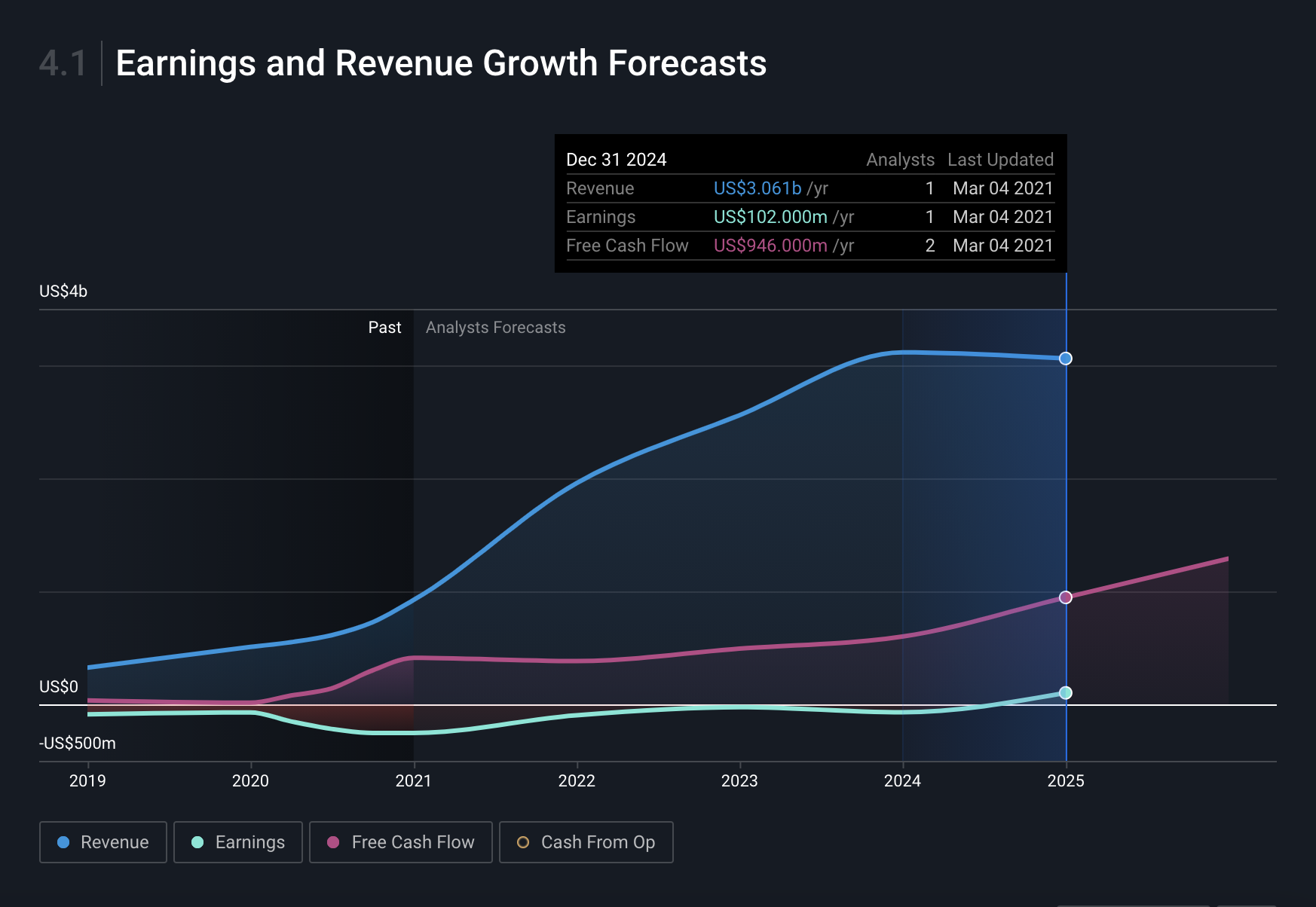 As for other metrics such as DAU and hours engaged, they increased 84% and 124% over the year, respectively. We know that these metrics flow through into bookings, revenue and FCF, so they’re important to watch because they’ll help guide the valuation.

To help justify the current valuation, the company will need to continue to aggressively grow its daily active users, and it wouldn’t hurt if the rate of monetization continued to increase too. Trends for both metrics so far have looked promising. Paying users (a subset of DAU) have increased from 125k in 2018 to 490k in 2020, and monetization has increased from $41.53 in 2018 to $57.77 in 2020. Even if the monetization stayed the same from now, the company would only have to reach 54m DAU’s by the end of 2024 to reach its forecasted revenue of $3.06bn, which is a 63% increase on today’s DAU.

Roblox is the newest kid on the blox and it doesn’t fit in with the rest of the gaming companies, but in a good way. The platform business model and growth flywheel effects have allowed it to build scale quickly and generate huge bookings growth. It commands more children’s attention than any other social media platform through its enviable engagement levels. To justify today’s valuation, daily active users need to continue increasing rapidly in line with historic levels, and monetization rates need to at least hold current levels, so these are important metrics to watch. If the company can do that, it could then be the next huge platform company.

The company’s strong cash flow generation, recent funding rounds and lack of debt have provided it with plenty of capital to afford its growth. Check out our full analysis of the company’s balance sheet within our company report.

Simply Wall St analyst Michael Paige and Simply Wall St have no position in any of the companies mentioned. This article is general in nature. We provide commentary based on historical data and analyst forecasts only using an unbiased methodology and our articles are not intended to be financial advice. It does not constitute a recommendation to buy or sell any stock and does not take account of your objectives, or your financial situation. We aim to bring you long-term focused analysis driven by fundamental data. Note that our analysis may not factor in the latest price-sensitive company announcements or qualitative material.